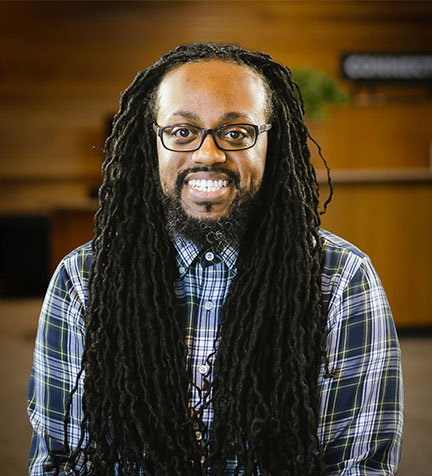 Rickey E. Dawson Jr. was born and raised in Fayetteville, NC. In 2007, Rickey earned his BA in Religion from Campbell University in Buies Creek, NC. In 2013, Rickey graduated from Southeastern Baptist Theological Seminary (SEBTS) in Wake Forest, NC, earning a Master of Arts in Church Music with a concentration in Vocal Performance. Rickey also earned a bachelor’s degree equivalent certification in Music while at SEBTS. Rickey was the 2013 recipient of the SEBTS Peter Blanco Music Award for vocal performance and academic excellence. His vocal training includesclassical and operatic performance in Italian, French, Latin, andGerman, and worship styles in Spanish and English. He performs several genres including Jazz, Gospel, Christian Contemporary, Blues, Pop, R&B, and Broadway. Rickey also loves working with instrumentalists from rhythm bands to conducting orchestras!

Rickey has been very active in the church and the community since his teen years. He has been training voices in the choir setting for about 14 years and maintained a private vocal studio for 3 years. Rickey is passionate about worship leadership within the context of the local church and has worked as a music minister for about 2 years. In 2014, Rickey moved to Columbus, GA, to lead the upper school musical and choral departments at Calvary Christian School. While there he met and married his lovely wife Anna. In 2018, Rickey was called to direct the music and caring ministries at Mill Creek Community Church.

Rickey is passionate about honoring God the Father by exalting Christ the Son, empowered by the Holy Spirit in the act of corporate worship. Worship music should be a marriage of sound theology and dynamic doxology!

Rickey’s wife says his favorite food is “meat.” Rickey loves to take nature walks, is a neat-freak, and loves going to the movies. Rickey is a creature of habit and is an extreme list-maker. Rickey believes that pizza, pickles, peas, peanuts, peanut butter, and pepperoniare all products of the Fall, and he wishes his wife would believe the same. Rickey dearly loves his parents, sister, nieces, andnephews. Rickey LOVES his wife and on most days carries a coffee mug with their engagement picture on the side.